This post is long overdue. I went on a bro-trip (with my actual brothers!) over to Eastern Canada (Toronto, Montreal, and Ottawa), so I decided to fire Bahzad an email. To my delight, I got to meet the Naked & Famous team at their showroom/warehouse in Montreal. Brandon and Bahzad are two incredible people. I came into their showroom very excited to meet them, and I left it even more excited because I met them and had the opportunity to learn from them and swap stories!
FYI, I chose to wear Naked & Famous denim prior to the international media explosion about my Nudie Jeans experiment. I got the N&F for Christmas from my brothers, and then I started to wear them on January 1, 2011. The media event for my Nudie Jeans was on January 19, 2011. I joined the Heavyweight Denim Championship on February 3, 2011. My N&F are still going strong!

I’ll never cease to be amazed/amused by denim that stands on its own. I’m saying ‘Thirty’ and making the ‘Two’ with my fingers.

The Naked & Famous banner given by their mill on 32 oz denim.

Bahzad telling the story about Big John, and how they got to collaborate. I learned a lot in our short meeting.

A Japanese brand that they picked up in Japan. Interesting choice of name, eh?

A square of 32 ounce fabric. The yarns are so fat! I finally understood what rope-dyeing meant when he gave me a yarn to unravel. It makes so much sense!

Bahzad showcasing the reverse-fade denim. A white resin coating was added to the denim that fades to reveal the indigo underneath.

I’ve never seen so much selvege in my life! My eyes were bleeding indigo and selvege.

Some jeans from their warehouse.

Among their many crazy fabric experiments, they created a very limited set of 100% cashmere denim. It retailed for ~$1300 at Barney’s in the States. It was very very soft.

Examples of worn-in N&F jeans. These are featured on their website’s blog. On the left is from a guy in Manitoba (or Saskatchewan – http://www.nakedandfamousdenim.com/blog/photos-of-faded-jeans/ . The pair on the right is worn by Brandon, the President, designer, and founder of N&F, http://www.nakedandfamousdenim.com/blog/jeans-evolution-1-year/ .

The Naked & Famous team and me. Bahzad (PR) on the left and Brandon (President, Founder, and Designer) in the middle. Meeting them was an electric experience. Their passion for denim shone like the sun on a cloudless summer afternoon. I was bummed that we could only meet for an hour because they have so many stories and so much knowledge and passion about denim and the industry. It’s unsurprising that so many big denim companies are making collabs with them because they see the magic of Naked & Famous. I’m proud and excited to wear their jeans for the next two years for the Heavyweight Denim Competition!

Next project: Naked and Famous x Blue in Green 21 oz collaboration in the Weird Guy cut

Before I post up all my Nudies stuff, here’s the next project I’m working on. My brothers Chris and Jon bought me a pair of Naked & Famous jeans (http://www.nakedandfamousdenim.com/) for Christmas. Originally, it was going to be a competition against my friend, Vince, who got the N&F 19z Elephants, for one year (Jan 1/11-Dec 31/11). The competition has heated up since I stumbled across superfuture’s (http://www.superfuture.com/), the biggest community of raw denim enthusiasts, Heavyweight Denim Championship of the World (http://www.superfuture.com/supertalk/showthread.php?t=254326). It’s a two year competition against raw denim enthusiasts around the world with denim that’s over 17oz. There are some big players with the higher-end raw denim, but I know my N&F will rise up to the challenge!

Here are the photos: 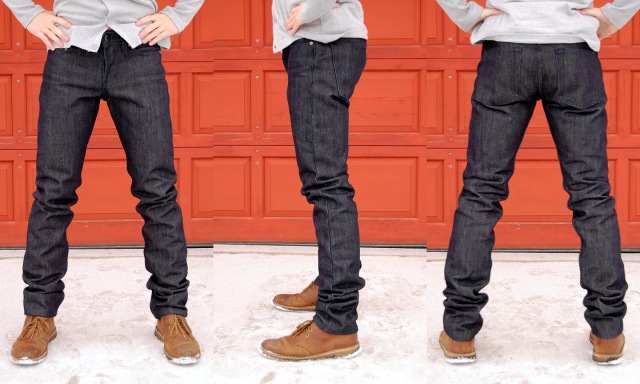 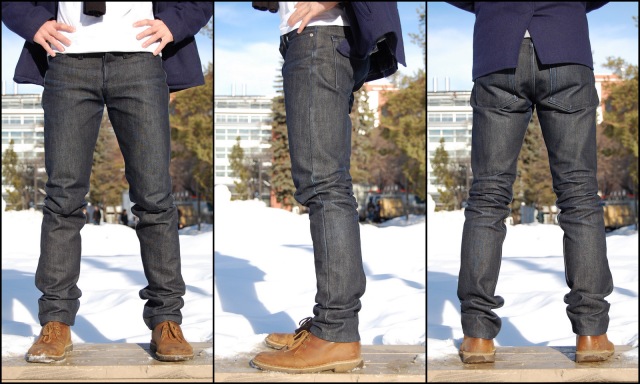 Photos taken at different times of the day and locations, so note the light difference.

I join my brethren for representing Canada in this competition. I think I’m the only one in Western Canada.

These are the images I worked 15 months to produce. I persevered through insults, disgusted looks, inquisitions from friends and family, and other trials and tribulations every iconoclast faces when they stick to their guns. What do you think of the look? I’m happy with it. 🙂

Tonight’s a busy night for blog posts. I just want to catch up on all of the things I’ve been doing in the past few weeks, but it’s going to take some time. It’s okay though because I’m a patient guy. 😉

Here is the public Picasa Web Album of my weekly catalog.

My brother, Chris, took these pictures regularly. I used Picasa to create these YouTube videos.

This is a video of the latest interview I did. I hope you enjoy it. 🙂

Time to strike while the iron is hot

Who knew that the world would embrace my little raw denim experiment? I’ll document my thoughts and reactions about this whole experience in the upcoming days.

I don’t know what will become of this blog, no less my moment in the sun, but stay tuned and find out! 😀